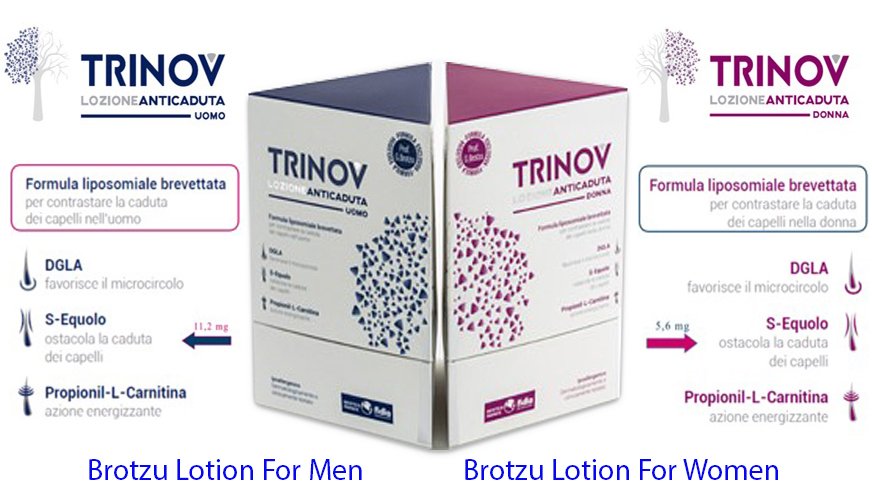 Trinov Lozione Anticaduta, a hair loss product launched in 2019 by an Italian company Fidia Farmaceutic, has gained much excitement and furor for its potential to reverse hair loss.

The product is also know as Brotzu lotion, which was widely used before the official name was assigned by the manufactuer.

If you are curious about the name.  Lozione means lotion in English, while Anticaduta means a preparation for hair loss treatment. Thus the whole name is Trinov lotion For Hair Loss Treatment in English.

In this article, we will be discussing the constituent ingredients of the product, its mechanism of action, validated results in men and women, adverse effects and side effects, accessibility and price, as well as its performance compared to other well-established remedies for hair loss – Minoxidil and Finasteride.

The structures of the three ingredients are shown below. 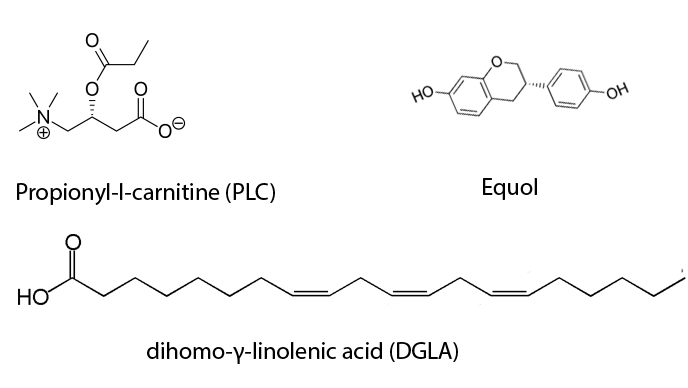 For the complete ingredient list, concentration and effect of each ingredient please read Brotzu Lotion's ingredients.

Brotzu lotion contains equal parts of DGLA, PLC and Equol; however, the formulation for men contains more Equol than that for women because of the fact that men have a endogenously higher level of testosterone. Equol works to reverse hair loss by directly binding to dihydrotestosterone (DHT) and inhibiting its action. Equol can also bind to 5α-reductase, the enzyme which converts testosterone to DHT. DHT and 5α-reductase are directly responsible for androgenetic alopecia, the form of hair loss commonly seen in men and women.

DGLA which is derived from dietary linolenic acid is converted into the prostaglandins PGE1 and PGE2. The elevated PGE1 and PGE2 promotes the microcirculation which results in vasodilation and the overall suppression of inflammation [5]. PLC protects the hairy follicular tissues from oxidative damage through its antioxidant properties. Moreover, PLC works to increase energy production by stimulating the generation of adenosine triphosphate (ATP), which is the energy currency utilized in the human body [6].

A recent original study which was published in September 2019 shed light on the potential for Brotzu lotion as a pharmacotherapeutic option for sufferers of androgenetic alopecia (male-pattern baldness). Led by Dr. Giovanni Brotzu himself, the research team recruited 30 men and 30 women for the study. The mean age of all participants was 30-60. At the end of the study which lasted for 6 months, 63% of men experienced an increase in total hair number. However, the percentage change of total hair count after 6 months was not significant – just +1.6%. There was also no significant increase in the diameter of the hair [1].

More women (90%) experienced a significant increase in the total number of hairs after 6 months. However, in this group – the percentage change of total hair count after 6 months was also not significant – at just +1.1%. Images showing the results of this study in 2 participants can be referenced in Figure 1 below. 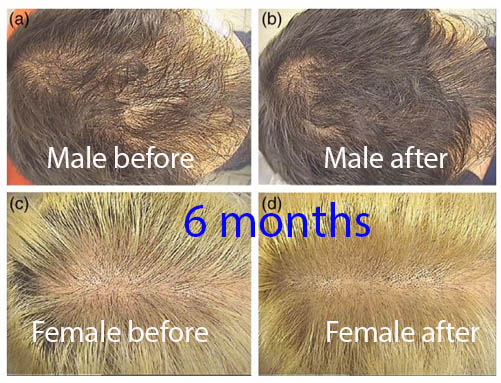 Figure 1: Brotzu lotion before and after photos, representative images from a male and female participants.

During the study conducted by Dr. Brotzu, no significant adverse effects were observed or reported. However, 1 out of 30 women reported a “mild burning sensation” immediately after each application of the lotion for the entirety of the 6 month treatment duration. This burning sensation resolved within a few minutes. Through a structured questionnaire, the researchers assessed the tolerability and usability of the Brotzu lotion in each of the 60 participants.

Taking reference to Figure 3 above, most participants were satisfied with the Brotzu lotion in various aspects ranging from the thickness of their hair, the fragrance of the lotion and overall assessment. It must be cautioned however, that this study only recruited a very small sample size of 60 participants. Individuals with sensitive skin or known allergies may develop allergic reactions to any 1 of the 3 active compounds in Brotzu lotion (DGLA, PLC and/or Equol). Furthermore, the inhibition of DHT and 5α-reductase can be theorized to cause any of the following side effects:

Price and Accessibility of Brotzu Lotion

One bottle of Brotzu lotion costs anywhere between USD$70 – 90. Each bottle contains 30ml of lotion and is purported to be sufficient for 1 month of treatment. In other words, a 6 month course of Brotzu lotion therapy would cost you approximately USD$500. Here are some e-marketplaces from which you may purchase Brotzu lotion:

Brotzu lotion is available in the following countries for purchase:

Brotzu Lotion VS Minoxidil VS Finasteride

As the new contender in the line of hair-loss therapeutics, Brotzu lotion has received worldwide hype and excitement in regard to its therapeutic potential for androgenetic alopecia. However, how does it stand up against the heavyweights that are Minoxidil and Finasteride?

The biggest limitation of Brotzu lotion, is that only one small study has been conducted so far to validate its claims. The study conducted by Dr Giovanni Brotzu looked at just 60 patients over 6 months and although there was an improvement in several parameters, the total percent change of hairs was not significant for both women and men. Furthermore, the researchers did not assess if terminating the treatment would cause participants to return to their pre-Brotzu conditions, and if so, how long that process would take. This is important, as one bottle of Brotzu lotion costs approximately USD$80 dollars, making a 6-month course cost a staggering USD$500. In contrast, a 6-month course of Minoxidil only costs USD$50. In other words, one ml of Brotzu lotion costs almost 20 times than Minoxidil.

Furthermore, the evidence for minoxidil is extremely robust. In 2015, a systematic review and meta-analysis of Minoxidil’s efficacy in androgenetic alopecia was conducted. The researchers concluded that “a significantly higher proportion of participants in the minoxidil group had greater hair growth than participants in the placebo group as judged by both investigators and self-reports [7].

The mechanism of action of minoxidil is also better understood, as it stimulates the microcirculation near the hair follicles by promoting arterial vasodilation as well as activates prostaglandins to stimulate hair growth. Years of studies have shown that minoxidil is well tolerated and may cause mild skin irritation and some isolated itching. One disadvantage of minoxidil is that it causes “telogen effluvium” which is characterised by some shedding of hair early in its course.

Likewise, Finasteride has also been the subject of research scrutiny for many years, in regard to its therapeutic applications in androgenetic alopecia. A landmark study in 1998 showed that just 1mg of Finasteride was able to slow the progression of hair loss and increase hair growth in men aged 18 to 41 over a span of 2 years.

While Brotzu lotion has shown some promise in its role as a hair-loss prevention and reversal agent, it does not have enough robust evidence to put it on the same pedestal as Minoxidil or Finasteride. More studies – specifically, randomized clinical trials with the inclusion of a placebo arm need to be conducted before its claims can be verified. Furthermore, at its current cost which is 20-fold higher than Minoxidil, choosing it over Minoxidil or Finasteride cannot be reasonably justified. Compounding this is the fact that Dr Brotzu has not been able to conclusively determine if termination of the lotion would result in the loss of net benefits gained. If this is so, then patients must be mentally prepared to incur the high costs of Brotzu lotion indefinitely.

About the manufacturer:  Fidia Farmaceutici was founded in 1946 in Bologna. In 1975, it acquired the registration of Ganglioside – a neuropathic drug and rose the ranks to become a leading pharmaceutical company in Italy. In 1999, it was acquired by P&R Holdings and remains one of the largest Italian pharmaceutical companies today, with its own research and development (R&D) laboratories.

How long does it take to see any results? Can I stop using the product after I achieve the results?

Typically it takes 3 to 6 months to see any regrowth. Like mainstream regrowth product such as minoxidil and finasteride, you need to continue to use the product to keep the regrown hair.