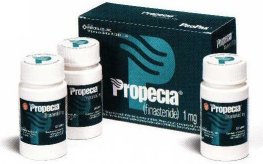 Propecia is one of two FDA-approved drugs for treating hair loss.  Propecia is an oral medication that suppresses DHT, the hormone that causes male-pattern baldness. Your genes target the DHT-sensitive hair follicles, causing them to shrink, which leads to hair loss. Propecia pills stop the development of DHT hormones, in turn stopping hair loss. The product has been found to stop further hair loss in 60 percent of men and in some cases even reverse hair loss to some degree.

Originally created to shrink enlarged prostates, Propecia Finasteride comes in one milligram tablets designed to treat mild to moderate male-pattern hair loss at the crown and mid-scalp. The prescription pills, which are taken daily and offer results in three months, tend to work better at slowing down hair loss than re-growing hair. Prescription Propecia costs between 45 and 55 dollars for 30 tablets, while less expensive generic Propecia alternatives include Finpecia and Finax.

Overview: When Rogaine came out it made big news because it was the first release by the major pharmaceutical companies that promised to cure baldness in men. It almost made as many waves as Viagra. So when Propecia came along, everyone got even more excited because this was something that you didn’t have to fuss with. You could just take a pill, and get on with your day without trying to massage anything into your hair.

The Claim: The claim of Propecia was very simple: it stops your hair from thinning, and even helps it to grow back. This is the basic claim of almost every hair loss treatment out there, but the one characteristic separating Propecia from all the others is that they have the scientific evidence and clinical trials to back up what they’re saying.

The Hype: There are some products out there that don’t even need hype because they solve a problem that speaks to the heart of the customer. When talking about male pattern baldness you automatically get the attention of millions of men out there that would kill in order to keep their hair from falling out. When a major drug company says they have a pill that does the trick, you can expect a stampede.

The Cost: You can get a 30 day pack of Propecia for about $83 when shopping online. There are sites out there that will let you buy it, but you will need a prescription from your doctor. Propecia is usually not covered by most health insurance plans because male pattern baldness does not qualify as an insurable condition. However you’ll want to check with your own coverage plan to verify whether or not you’ll have to pay out-of-pocket for it.

The Commitment: The promise of Propecia was that you don’t have to do anything else to ward off your hair loss but pop a pill. It was the classic miracle in a bottle, and men jumped at the chance to give this a try in hopes that it would finally be the solution they needed. However, as with most products that have a low commitment level, they’re usually too good to be true and you will end up sacrificing something in order to make up for the ease of use.

Evaluation:Two out of three is not bad, and that’s how many men saw some hair regrowth after taking Propecia over the course of five years. That’s 66% of men, which is why this drug had so much promise before basically being pulled from shelves. That 66% does not include the percentage of men whose hair stopped falling out, but they didn’t necessarily see any regrowth. That percentage is 42%, which means that almost everyone that tries Propecia end up seeing some sort of visible results.

Propecia would be a winner if it weren’t for the side effects. Almost all drugs come with their share of side effects, but in the case of Propecia things get a little personal.

Side Effects:It’s the adverse side effects that are really the Achilles’ heel for Propecia. It’s not just that this drug has negative side effects, but that most of them are sexual in nature. These can include impotence, unusual ejaculations, less ejaculate during ejaculations, erectile dysfunction, and pain in the testicles. Since all of these side effects effect our male ego even more than going bald does, they’re having a tough time convincing men to stay on the treatment.

Final Propecia Review: It’s a shame that Propecia has so many negative side effects, because it would be great to be able to stop going bald just by taking a pill. Technically, this product works, but realistically speaking there’s just no way to use it even for a short period of time. And since the results that you get do not last when you stop taking the drug, there’s really no point in even trying it.

If it were the case that the results you got from Propecia lasted even after ceasing treatment, it might be worth the risk to use it until you got the results you wanted, and then stop taking it. But since the results you get will go away after six months to a year, you really can’t justify putting your body in danger.

Azelaic Acid vs Finasteride for Hair Loss, Which is better?