Many people think pyrilutamide is the most exciting development for hair loss treatment since finasteride. Does it live up to the hype? This article will help you answer the question.

(BTW, Where to buy this material is listed at the end of this article).

KX-826, also known as Pyrilutamide or Pyri, is a new chemical developed by Suzhou Kintor Pharmaceuticals, a Chinese biotechnology company focusing on androgen receptor-related disease areas without effective treatments. These include conditions such as prostate, breast, and liver cancer as well as hair loss. Pyrilutamide is undergoing Phase II and III trials in China and the United States. Its structure is shown below in comparison to that of RU58841. As you cans see, they have very similar structures. The different parts are highlighted by red bonds.

How does pyrilutamide work to treat hair loss?

Pyrilutamide is a non-steroidal anti-androgen (NSAA). NSAAs work by blocking testosterone and DHT from binding with the androgen receptor in the follicle.

DHT is the key androgen that causes hairs to thin.

In the scalp, testosterone is converted into Dihydrotestosterone (DHT) by an enzyme called 5-alpha reductase. DHT strongly binds to hormone receptors in the hair follicle and activates genes responsible for the shortening of the growth phase. As this process is replicated over the scalp, hair coverage thins out usually over the crown, temples, and frontal areas. Pyrilutamide is an antagonist of the androgen receptor (AR). It binds to hair folicle AR to prevent DHT from binding to it.

Does Pyrilutamide work for hair loss?

Whether a topical NSAA like Pyrilutamide works for hair loss and has an acceptable side effect profile is yet to be confirmed.

What does the evidence say?

A larger scale, phase III trial is currently underway. According to Kintor Pharmaceuticals, the trial will be carried out across 26 hospitals in China and will involve more than 400 patients. Enrolment for the trial was due to be completed last month with the trial due for completion at the end of 2022. The trial will aim to assess the change from baseline in non-vellus target area hair count (TAHC) after 6 months of treatment.

As Phase III trials typically involve large numbers of patients, the results will likely give us a better idea of how safe and effective (or not) pyrilutamide is.

The below image is reportedly a leaked slide of data from a presentation of the completed phase II trial. The left table shows the characteristics of the study recruits, while the box on the right shows some of the results of how effective the KX-826 is versus a placebo.

We can see that it was tested at two different concentrations, one group of 27 patients used 0.25% twice a day, while another group of 30 was given 0.5% twice a day (BID). 19 People were given a placebo, likely a dummy serum.

At first glance, both doses seem to have a positive effect on hair growth. 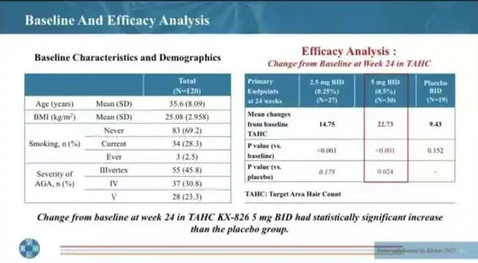 The nitty-gritty of the numbers.

The P-values below the TAHC count, are the results of mathematical tests of statistical significance. Researchers use these tests to work out whether their results are down to a genuine effect, or due to pure chance. A value of <0.05 is generally taken as the cut-off for a positive effect. A P-value of <0.024 suggests that the 0.5% serum is significantly better than the placebo, but with a P-value of 0.175, the 0.25% serum is not.

How to make Pyrilutamide solution

If one likes to make a solution, a propylene glycol and ethanol vehicle would be a suitable vehicle for this material. Water should be avoided, due to the nitrile group (-C≡N) that can be hydrolyzed in both acidic and basic enviorment in presence of water.

Pyrilutamide solution should be stored away from sunlight, in a dark area or room at 0 - 4 C.  For short-term storage, 1 to 2 months, it can be stored at room temperature.

Pyrilutamide power is expected to be stable for several years when stored in a freezer.

Based on the data of the trial, pyrilutamide is used as a topical solution applied directly to the scalp twice a day. A dose of 0.5% seems to be the most cost-effective dose for treating hair loss.

The cost of using Pyrilutamide for hair loss.

Pyrilutamide is expensive due to the limited number of manufacturers that produce this molecule. It is currently priced at >$200 a gram, which is several time more expensive than RU-58841.

Using leaked data from the clinical trial, we can assume a dose of 0.5% (1ml) twice a day or 10mg a day would be the most cost-effective dosage to treat hair loss. This would mean that using pyrilutamide for 6 months would likely cost upwards of $400.

The price is expected to go down when there are more manufactuers start to make it in the future.

The two most common treatments for androgenetic alopecia are finasteride and minoxidil, both of which have good evidence behind them[1]. Each targets different aspects of the hair loss process.

Finasteride (Propecia or Proscar) is an oral 5 alpha-reductase inhibitor, which means that it blocks the conversion of testosterone to DHT and has been shown to decrease scalp DHT levels by up to 60%[2]. The most common side effect of Finasteride is sexual dysfunction – problems getting or maintaining an erection, delayed ejaculation and decreased libido, affecting around 1.5% of men [3,4].

Minoxidil works by dilating blood vessels on the scalp. Its mechanism isn’t fully understood, but it is thought that by increasing blood flow to the hair follicles, the growth phase is prolonged and the production of thin, vellus hairs is decreased[8].  Minoxidil is safe and has few side effects aside from localized irritation of the skin[9].

Pyrilutamide vs other Androgen antagonists

Pyrilutamide is not the first androgen receptor antagonist that has been used in the treatment of hair loss. RU-58841 is a non-steroidal anti-androgen (NSAA) while CB-0301 is a steroidal anti-androgen. Topical anti-androgens may have a preferable side effect profile than 5-alpha reductase inhibitors such as finasteride and dutasteride because the former do not affect DHT level while the latter does.

This compound was previously under investigation by the manufacturer, ProStrakan, a Scottish Pharmaceutical company, and phase I and II trials were completed, but no data from these trials was published and clinical trials have halted since 2007.

Some people who can't use finasteride have been using RU58841 as alternative. Some received positive results, while some didn't and hope Pyrilutamide will be the savior.  Yet, it is still not known whether those who got side effects from finasteride and/or RU 58841 will have no side effects from this new product.

Cortexolone 17α-propionate also known as CB-0301 is a topical steroidal anti-androgen. While it has a slightly different structure to NSAAs like pyrilutamide and RU588, it works similarly, blocking testosterone and DHT from binding to the androgen receptor. A Phase II trial of 404 patients was completed in 2019 using male patients aged 18−55 with mild to moderate androgenetic alopecia.

While the full study results are unpublished, the manufacturers reported that CB-0301 exhibited a good safety profile even after 12 months of treatment. A phase III study using a 7.5% dose is expected to start in the second half of 2022.

Pyrilutamide - What can we conclude?

Pyrilutamide is very new and looks like a promising new addition to the hair loss armoury. It has a mechanism of action on DHT function that could see it work similarly to Finasteride and Dutasteride or RU58841 and would likely have similar side effects to these products.

Unfortunately, it’s hard to say much more than that for the moment. The lack of available information on side effects and safety makes it hard to safely recommend.

Assuming that the leaked information is genuine, the data suggest that 0.5% pyrilutamide used twice daily is an effective product for male pattern hair loss.

Until the study data is published, many questions remain unanswered. Information such as the study design, how the participants were recruited and whether they were taking other hair loss treatments at the same time will affect how reliable these results are.

The ongoing trials in the US and China will also give a better indication of how promising a treatment this is and it will be very encouraging if their results agree with the data we have so far. Until then, we recommend using Finasteride, Minoxidil and RU58841, which have more information about their safety and effectiveness available.

As for Pyrilutamide…watch this space.

You can visit this page (https://www.minoxidilmax.com/pyrilutamide-solution) to order pyrilutamide solution.

How to make 0.1% finasteride without minoxidil in 10 seconds

What is the half life of pyrilutamide?