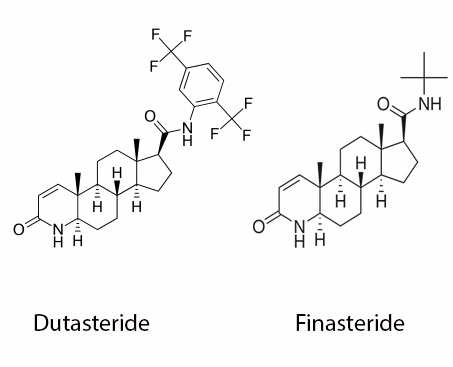 Dutasteride:  A Modern Cure for Balding? Modern drugs are making great strides in solving many of the problems we used to simply accept as our fate.  Think, for a moment, about the drug Botox. Initially introduced as a vanity drug to help people eliminate wrinkles, it's now been shown to help migraine sufferers end debilitating headaches. As researchers put  more energy into testing off label uses, they are finding that many products once marketed for one medical problem are surprisingly effective at solving other problems as well.  Dutasteride, a product for benign prostatic hyperplasia (BPH) has been suggested to be effective weapon for hair loss treatment.

The Origins of this product

Originally, Dutasteride was designed to treat symptoms of benign prostatic hyperplasia – more commonly known as an enlarged prostate gland.  It works by lowering levels of the hormone responsible for causing prostate growth.  As this drug was used in more patients, however, researchers noticed something very interesting about it – it can also be used to treat androgenetic alopecia!  This is an exciting development, as Finasteride and Minoxidil, the most popular solutions on the market, also started out in a similar way.

Dutasteride was initially tested for this use in South Korea as early as 2009. Doctors there discovered that a dosage as little as .5mg per day could help many men regrow hair. Subsequent studies, though, have been performed. One 2014 study found that Dutasteride increased hair growth and width by 2% over Finasteride, commonly marketed as Propecia.

Why Does It Work?

Dutasteride works because it inhibits the 5-alpha reductase enzyme in your body. Finasteride does the same thing, but it only inhibits type II of the enzyme. Dutasteride, though, also inhibits both type I and II, which seems to account for the difference in the level of power of these two medications.

Do the Results Last?

One of the biggest problems of many hair loss medications is that they don't provide lasting results. Dutasteride is a bit different. The serum's half-life is five weeks. Finasteride, though, only has a half-life of six to eight hours. Other medications have a similarly short half-life, and that means it can't stay in your body for a long period of time. Dutasteride continues to work long after you've stopped taking the medication, and that can mean more powerful results.

Is It Right For You?

If you want to try Dutasteride for hair loss, it is important to be aware of the side effects and whether you meet any of the conditions for possible interactions with other medications you may need to take on a regular basis.  In general, though, Dutasteride is the perfect choice for creating real hair growth. It manages to target the real cause of hair loss, thus dramatically slowing the progression you see in the mirror every day. More studies are showing exciting possibilities for Dutasteride every day, and it could be the way to ensure you regrow and maintain your hair. Now, more than ever, it's being proven as one of the hair loss products that actually work! Contact us today to learn more.